A Thousand Words! (Honey The Hippie, Peace Of Mind) 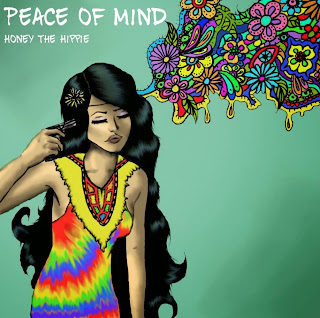 The album cover really caught my eye when I saw it on deadendhiphop.com, otherwise I probably would not have listened to her music. The album cover she uses is a small piece of a larger picture which I think is really cool but to get the true album cover you would have to go to her Facebook page (search "Honey The Hippie"). But as for the picture itself, I think it’s a masterpiece created by Samantha Shu Shu
(which is her Facebook name). The yellow daisy on her hair is a nice touch showing that this woman is connected to the earth by wearing and excepting it. Her headband symbolizes connection to people (hippies) because a circle represents unity and it shows that she has opened her mind. Her dress bestows all colors of the rainbow because hippies appreciate all colors of the earth, same goes for race and ethnicity. The yellow around the collar represents happiness. Her hair is long and nappy because hippies feel as if your hair is your identity and keeping neat hair means conformity to some extent. The collage is interesting because hippies get a bad rep for being druggies and weirdos. The picture here has something similar to how a hippie thinks, a drug trip, or both. The flowers represent people because they are beautiful, complex, come in different colors, shapes, and sizes. One thing that stood out to me was the eye within the portrait; it’s red on the outside to represent passion, pink to complement the red, and a light blue in the iris. Blue represents the inner peace within herself but a fiery passion (red) on the surface. This eye could also mention the “third eye” all humans have but only a few know how to access. Hippies are a gathering of people who have the third eye trait to see what really goes on in this world. This could be the reason why she is holding a gun to her head, she sees how horrible and ridged this world really is and she can’t take it anymore. I did find it strange because hippies are all about peace but she is holding a gun, but the author did it for some reason and I like it.